The History Of Afrikaans In South Africa | Language Reach

The History Of Afrikaans In South Africa

The History Of Afrikaans In South Africa

People like Nomsa Maseko, a BBC News correspondent in Johannesburg, refused to speak the language in her adult years after school authorities oppressed her with it in high school.

Language, by force, disillusions one and strips them of a part of their identity that only language can provide.

So, a mere 13% of South Africans speak the language Afrikaans, some even blocking it from their memory. That’s how oppressive it felt to them.

Yet passengers hoping to travel via the Ryanair airline must do a test on Afrikaans to prove their nationality.

Despite the impracticality of it all, Ryanair has stuck to its guns. 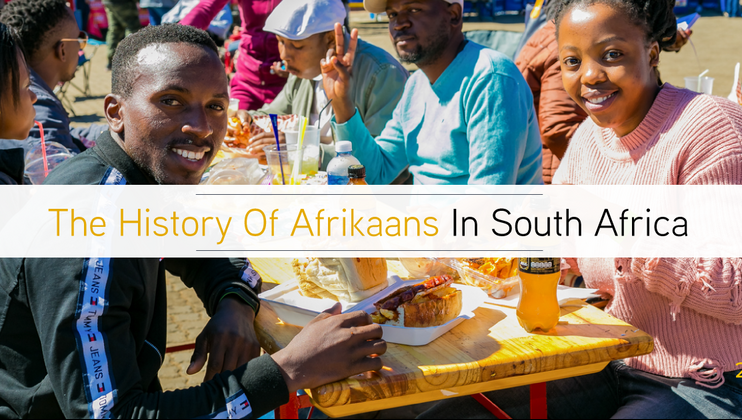 These same metaphorical guns are analogous to those used by white oppressors during apartheid — when colonizers forced Afrikaans on the black people of South Africa.

You don’t want to learn Afrikaans?

You may be physically harmed or simply not educated.

You don’t speak it in the current day?

You won’t get to travel and see your loved ones.

So where did Afrikaans come from, anyway?

South Africa, like much of the continent it sits in, is multi-lingual. Much of the population is fluent in at least two of its 11 official languages.

These languages and their respective population usage, are:

Despite this diverse “langaguescape,” school policies are outdated. And many teachers refuse to fall in line with antiquated rules that lawmakers have put in place.

Code switching, aka code-mixing, is when someone infuses various languages into their speech.

However, the matric exams in the country are offered in either English or Afrikaans in most schools. So students must choose to learn using either of the two in order to respond in their non-language subject exams.

Thankfully, the tides should be turning soon with new attitudes in the modern age.

But considering its history, many might wonder why Afrikaans — or English, for that matter — would be chosen for the national exams. Why not one of the people’s mother tongue?

And, more than that, why did Ryanair officials select Afrikaans to determine if South Africans can travel?

Are foreigners once again taking power back through language?

Let’s go back in linguistic history to discover the answer.

In obvious irony, the language termed Afrikaans is not indigenous to South Africa. It’s a mixture of Dutch and Zulu. The language was born out of Dutch colonization in the 17th and 18th centuries.

The white Afrikaners (Afrikaan-speaking Dutch immigrants) had control over the country’s political and agricultural sectors. In the early 1900s though, they began to fear a loss of control.

The Clash Between The British And The Afrikaners

As has been so inherent in Africa’s history, there were not one, but two colonizers fighting over the prosperous land.

The British, who also had a presence in the southernmost part of the continent, began to look down on the Afrikaners as well as their creole tongue.

As a result, the Afrikaners in power made Afrikaan an official language… rather than categorizing it simply as what it was — a creole, or a Dutch dialect.

Was Afrikaans Ever Going Away?

In 2013, Rachel Hazultine wrote a paper proposing that Afrikaans might be losing ground in light of English dominance.

“With the arrival of nine new official languages, Afrikaans may be threatened enough to lose its balance in the linguistic power situation of South Africa, falling below English in prestige, as already schools turn to English over Afrikaans for a language of better opportunity (Kamwangamalu 2001).”

Ten years later, in light of Ryanair’s latest controversy, it’s clear her foresight was a bit off. At least, for now.

But, she did make one claim (among others) that rings true:

“Ignoring the formerly dominant language can be seen as retaliation to the oppression of Afrikaans during apartheid, which is perhaps justifiable to some but does not offer a solution to the issues of multilingualism.”

But ignoring any problem doesn’t make it go away.

It’s why Maseko, who we mentioned earlier had dispelled Afrikaans from her language vocabulary, is now speaking about the matter again, courtesy of Ryanair.

Racism Through Language During Apartheid

In the year 1976, when apartheid was still underway, black Africans fought against their oppressors. Their primary motive resulted from the enforcement of Afrikaan in schools.

Out of the 170 people that died in the Soweto Uprising, most were schoolchildren.

When South Africa emerged out of apartheid but was still under white leaders’ rules, white and black children were made to attend separate schools.

This disparity carried over into the quality of education received. How? Racist attitudes meant more governmental finances went towards schools occupied by white children

The Bantu Education Act imposed this initial segregation through education. Its creator, Hendrik Verwoerd, the Minister of Native Affairs who wrote the Act at the time, once blatantly stated:

Note how these black natives were in their own communities and not what was supposed to be a European community.

Black Africans would go on to fight against linguistic oppression through various organizations and groups.

Post-apartheid, language policies became more streamlined. But not, of course, in favor of indigenous languages.

In very early years of education, students can still choose to learn in their mother tongue. In grade four, however, they must choose between learning either Afrikaans or English.

I.e., either the former Dutch or British oppressor’s languages.

Native Afrikaan and Enligsh speakers have no such conflict. And due to resource shortages and not seeing the need, the schools shy away from requesting to teach other indigenous languages.

There is always a need, of course, to preserve the language of an original people.

Language Is For And By Its Speakers

This hope, that indigenous languages should be preserved for culture and identity, is, unfortunately, not guaranteed.

South Africa’s multilingual policy in part requires college students to study at least one indigenous language. Yet this won’t assure a broader change throughout the country.

Because in the past couple of decades, many black South African parents opted to send their children to English or Afrikaan-speaking schools due to their reputation.

Good parents will always do what they feel is best for their kids, when possible.

However, younger generations tend to have less appreciation for cultural practices. Will they push to ensure that the nine other languages are not taken over by English, a globally dominant language, or Afrikaans?

Or, will some of the lesser-used indigenous tongues disappear into extinction like the four Khoesan languages?

What Is Ryanair’s Next Move?

A couple of weeks ago, Michael O’Leary, head at Ryanair, suggested that a military presence might be needed to handle the chaotic travel situation.

Meanwhile, on Twitter, some people have suggested that South Africans have themselves to blame as they didn’t take enough security measures to decrease the chances of the passport fraud it’s now facing.

Why choose a language which is not spoken by the majority of a population? (Xulu is).

And why choose, between English and Afrikaans, the one spoken predominantly by white people in South Africa, when English is the more formally used language when it comes to business and international relations?

Is this just another dismal instance of history repeating itself?

Are the oppressors taking yet another step toward power without explicitly rearing their ugly heads?

Remember too, in case you don’t live there, that racism is still widespread and prevalent in South Africa.

So whether or not the South African government has any control over Ryanair’s policies, there remains a simple fact:

The language Afrikaans has an atrocious history and considering apartheid ended less than 30 years ago, this move is rubbing salt in black people’s still-open wounds.